Polycystic Ovary Syndrome (P.C.O.s) is the most common hormonal problem in women of reproductive age (from adolescence onwards). It affects more than 10% of the female population internationally, while it’s estimated that 20% of women of reproductive age suffer from Polycystic Ovary Syndrome (P.C.O.s) with a very significant percentage of women being undiagnosed.

Is there a genetic predisposition to PCOS?

Women with Polycystic Ovary Syndrome (P.C.O.s) often have a genetic predisposition from mother or sister who suffers from it. The risk from an affected mother is 35% while from a sister is 40%.

However, there is not enough evidence to qualify PCOS as genetic disorder.

It is common for women with Polycystic Ovary Syndrome (P.C.O.s) to be overweight. Surprisingly, in surgical and histological data from 1936 and onwards, it was found that 59% of women with P.C.O. were not obese.

Weight gain is one of the main symptoms of PCOs. Even when a woman engages healthy eating habits or starts exercising regularly, she is unable to lose weight. On the contrary, her body weight is increasing progressively.

Excess fat is usually deposited on the abdominal area. The presence of increased insulin in the blood (hyperinsulinemia) enhances fat accumulation, while impairing the process of weight loss.

Insulin is a hormone that regulates the metabolism of carbohydrates (glucose), proteins and fats in our body. Its main action, however, is the regulation of “Homeostasis”, ie maintaining blood glucose levels steady. 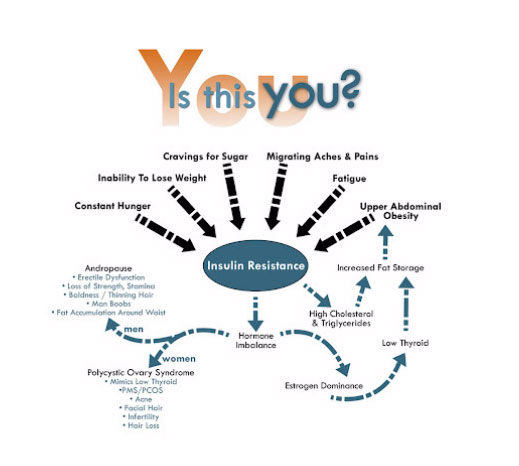 Women with Polycystic Ovary Syndrome produce more insulin (hyperinsulinemia) in order induce glucose metabolism. This is due to the “Resistance” that their body presents to insulin. In other words, the body produces more insulin in order to metabolize glucose thus reducing its blood levels.

Hyperinsulinemia in women with Polycystic Ovary Syndrome results in increased production of androgens by the ovaries. Receptors in the ovaries bind insulin, thus stimulating the ovaries to produce extra androgens (Δ4-androstenedione and testosterone).

This results in weight gain or obesity, anovulatory cycles and excessive hair growth on the arms, face, neck, midline of the body or even around the nipples.

Women with Polycystic Ovary Syndrome (P.C.O.), experience certain symptoms that manifest in the form of “dominoes”.  Most common are obesity, acne, hair growth and hair loss.

Due to the continuous increase of Estrogens blood levels in the blood, the stably increased Androgens- which induces estrogen production, as well as due to the increased insulin values, the production of fat cells in the body increases (obesity).

At the same time, the hypothalamus, the control center for the production of hormones in the brain, is stimulated, resulting in the production the hormone “GnRh”, which then stimulates the anterior lobe of the pituitary gland.

Subsequently the pituitary gland produces increased amounts of LH but less than the desired FSH. Therefore, the normal ratio of these two Hormones is reversed and as a result the follicles do not mature.

At the same time, a permanent increase in Free Androgens, results in unwanted body hair growth, acne and hair loss.

The symptoms and clinical findings of Polycystic Ovary Syndrome can occur individually or combined with different severity each time.

The most common skin disorders caused by PCOS are oiliness, acne, hair loss or unwanted hair growth in several body parts such as face, chest, abdomen, back, arms. Skin disorders may be more serious such as androgenetic alopecia, hyperchromatic lesions, discolored skin patches or even melasma.

Dysfunctions caused by the Hormonal Deficiencies and Imbalances of Polycystic Ovary Syndrome can manifest in the form of menstrual disorders.  Some of the symptoms are evident by the menstrual irregularity (cycle-to-cycle variation less than 20 days, frequent menstruation, amenorrhea). Other symptom manifestation of the syndrome take place inside the body, such as Estrogen dominance, hyperinsulinemia, hyperandrogenism, endometrial hyperplasia, polyps.

Finally, the most common symptoms and health issues that arise from Polycystic Ovary Syndrome are the following:

The use of birth control pills and other time-consuming methods used to treat the syndrome temporarily ‘’covered’’ some of the symptoms, creating side effects but without treating with the root of the problem.

Current and widespread therapies used to date include:

It is very important to mention that no therapeutic or invasive treatment solves definitively the problem of Polycystic Ovary Syndrome, as the causes of the Syndrome are not treated fundamentally. As a result, patients are exposed to synthetic chemicals and suffer for prolonged period of time with expensive therapies. Thus, the patients deviate from their daily routine, while their problem is not permanently solved therefore experiencing emotional and psychological stress apart from the physical symptoms.

The fact that PCOS is a syndrome, means that it’s a disease of unknown and multiple etiology. Therefore, it’s characterized by a wide range of disorders and constitutes the most controversial topic in Gynecological Endocrinology.

The combination of testing  at the cellular level, the imaging findings through transvaginal ultrasound control as well as the complete Medical History (HeadtoToe), which studies the patient’s epigenetic factors and fully checks all body systems, helps us to come up with the appropriate personalized treatment scheme.

The goal is to restore Biochemically, Hormonally and Functionally, the natural mechanism of the female body.

Benefits of Functional Therapies for PCOS

From the first trimester, the patient begins to notice significant changes in symptoms whereas she experiences major improvements in her well-being, mood, quality / quantity of sleep and stress levels.

What to watch for when managing PCOS

Any form of exercise helps to alleviate the symptoms.

Treatment can be started by patients from the age of 15 and onwards, while it is not affected by any other factor.