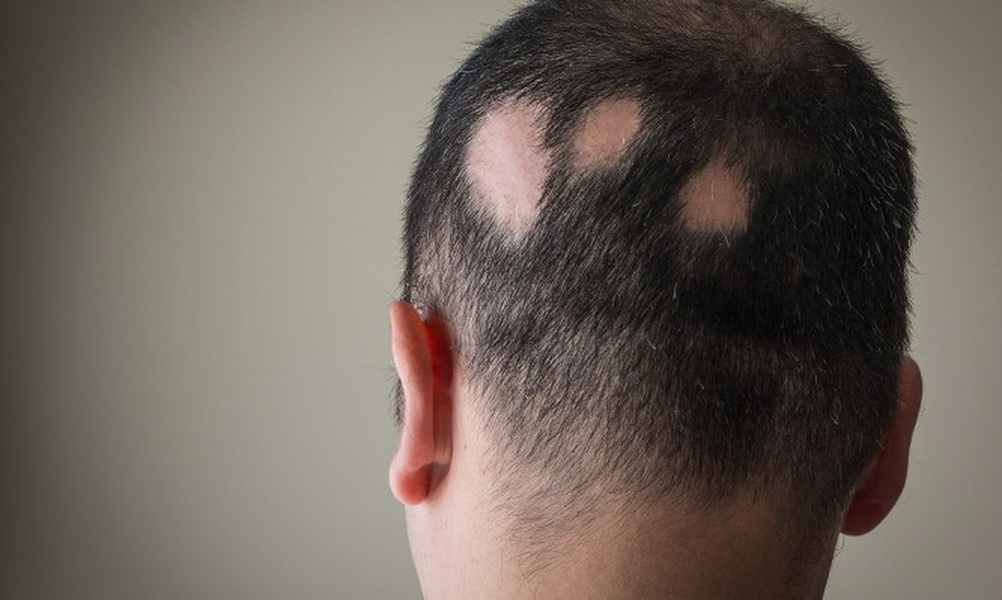 Alopecia Areata is an Autoimmune Dermatological Disease that affects 2% of the world population.

Although it does not cause physical pain or makes you feel sick, it can be a psychologically devastating disease. This autoimmune disease involves the loss of hair around the scalp, face and parts of the body. It can occur at any time without prior notice.

In Alopecia Areata, the Immune System attacks the substance in the follicles of your hair. So treatment plans must deal with the Autoimmune response that is happening.

Patients do not change their routine. On the contrary, they are gradually seeing it improve, along with their overall physical health.

There are medicines and creams that doctors often prescribe to help the regeneration of hair.

But most of the patients notice side effects and the only result is temporary hair growth.

There are also treatments that will help you boost your immune system, reduce inflammation and to correct nutrient deficiencies that may exacerbate the situation.

What is Alopecia Areata

Alopecia Areata or spot baldness is an autoimmune disease that involves the immune system that attacks your hair follicles, leading to hair loss. The word Alopecia means “baldness” in Latin.

The amount of hair loss experienced by people with Alopecia areata varies. Some lose small, round patches of hair about one quarter of the total surface area, a phenomenon which is more common. Other patients experience extensive or total hair loss.

The most common symptoms of Alopecia Areata

The most common area of hair loss is the scalp. Sometimes patients have hair loss in other parts of the body, such as the beard, eyebrows and eyelashes. Studies show that when patients develop Symptoms of spot baldness earlier in life, they experience more severe hair loss. This is especially true when hair loss begins within the first two decades of life.

However, the course of the disease can be unpredictable. Hair grows spontaneously in 80% of patients within the first year. But sudden relapses can happen at any time. Alopecia Areata involves fragmented hair loss, with one or more coin-sized gaps in the scalp or other areas of the body. Alopecia Areata can be converted to the other two types of Alopecia. This occurs in about 7% of patients with alopecia.

The two types of Alopecia that can develop in patients include:

Alopecia Areata Totalis: hair loss on the entire scalp (occurs in about 5% of cases)

Alopecia Areata Universalis: complete hair loss (occurs in about 5% of cases), all over the scalp, face and body, including areas such as eyebrows, eyelashes, hands, feet and pubic hair.

Research shows that nail changes occur in 10% – 38% of patients with Alopecia. The severity of the changes corresponds to the extent of the hair loss.

Some common changes include cleft nails, rough nails, sandy nails and vertical backs or lines running from the base of the nail to the top.

Alopecia usually begins when a person is between 20 and 40 years old. But the symptoms of the disease can occur at any age.

Studies show that in 82-88% of cases, patients have their first Alopecia at an age of 40 years.

40% of patients develop symptoms at the age of 20 years. If the symptoms occur earlier in life, there is an increased risk of an extended illness.

Individuals with Alopecia areata also at risk for anxiety and depression, thyroid disease (including Hashimoto’s disease), Vitiligo, Atopy (enhanced immune response to common allergens, which may result in conditions such as Asthma and Eczema), Lupus, Psoriasis, Rheumatoid Arthritis and other Autoimmune Diseases.

These psychiatric disorders can develop before or after the onset of Alopecia symptoms. About half of the incidents are noticed after symptoms occur. In addition, research shows that stressful events occur before the onset of Alopecia in about 10% of adults and 10-80% of children with the disease.

In Alopecia, white blood cells – which are supposed to protect your body from foreign invaders such as viruses and bacteria – attack the cells of the rapidly growing hair follicles.

As a result, the hair follicles become smaller and slow down the production of hair.

Scientists believe that a combination of genes can predispose a person for Alopecia.

But unlike some genetic diseases, it is unlikely that a child will actually inherit all the genes needed to predispose to autoimmune disease.

According to a systematic review published in Clinical, Cosmetic, and Research Dermatology, in which researchers collected data from all studies published in English over a period of 51 years associated with alopecia, the percentage of genes inherited ranges from zero up to 8.6% of the disease.

Studies on identical twins suggest that environmental factors also play a role in the development of Alopecia.

A study published in the journal of the American Academy of Dermatology evaluated 11 sets of identical twins and three sets of sibling twins to determine the compliance rate of Alopecia.

The researchers found that there was a 55% comparison rate for the identical twins and a zero for the other twins. This supports a genetic factor as the cause of Alopecia. But it’s not 100 percent, so environmental impacts eventually have to play an important role in the development of the disease.

Some environmental factors, according to conventional medicine that may play a role in the development of Alopecia Areata, include viral infections, psychological stress and trauma.

Scientists believe that environmental factors perpetuate an inflammatory response that interacts with your hair follicles and increases the body’s immune response.

This interaction activates the processes leading to hair loss. To explain this further, scientists point out the seasonal cycle of the disease and the increase in relapses in early spring, which occurs when there is an increase in viral infections.

Research also shows that people who have a family member with other autoimmune diseases such as rheumatoid arthritis, type 1 diabetes, lupus, Addison’s disease or thyroid disease have an increased risk of developing Alopecia.

There is no definitive cure for Alopecia. The hair is usually regenerated on its own. The treatments make the hair grow faster and avoid recession.

Some of the most common conventional treatments for Alopecia Areata include:

You should repeat the procedure every four to six weeks.This method of treatment does not prevent the occurrence of new hair loss. It is only used to help hair grow back into bald areas.

One side effect of corticosteroid infusions is that it can leave scars or cause atrophy on the skin after a treatment.

Anthralin is used to alter the immune function of skin. It is apllied topically for 20-60 minutes and then rinsed.

Anthralin cream is used to help hair return to bald areas. However, it can irritate the skin and even cause temporary discoloration of the skin.

Diphencyprone is applied topically to areas of hair loss to stimulate the immune system.

In fact, it causes a mild allergic reaction, sending white blood cells to the surface of the bald areas.The hope is that this combats inflammation at the affected areas and stimulates the hair follicles towards hair regeneration.

This type of immunotherapy is used to treat severe cases of Alopecia, including alopecia and alopecia universalis.

Immunosuppressants such as methotrexate and cyclosporin inhibit the immune response induced hair loss.

In a 2014 study evaluating the efficacy of methotrexate in Alopecia, the researchers found that hair regeneration of more than 50% occurred in 67% of patients.

Some side effects of taking immunosuppressants such as methotrexate include nausea, diarrhea, wounds, light skin and fatigue.

According to Functional Medicine the main causes of Alopecia Areata are:

All these deficiencies and dysfunctions lead to biochemical divergence and imbalance in all human tissues and organs. Our cells are the smallest units of life, the groups of which create the tissues and organs of our body. Biochemical and hormonal balance or otherwise homeostasis is related to our state of health and can be repaired:

– Without “special diets” and privations

– Without taking chemicals and pharmaceuticals

– Treatments acting individually or in combination, without side effects

The homeostasis and the metabolic pathways depend on the uptake and absorption of foods as well as on the toxic compounds that enter the body.

Alopecia Areata as an Autoimmune Disease can be treated with the help of specialized tests that help understand the underlying causes that cause it and which disrupt the immune system.

The treatment of Alopecia Areata according to the system of Functional Medicine works exclusively and individually on the real causes.

Treatments for Autoimmune Diseases can be administered individually or in combination, at the discretion of the specialist, in Functional Medicine.

Therapeutic protocols are calculated with algorithms and fractions based on tests analyzes and indicators and are strictly personalized.

The biochemical aberration that leads to the mutation of the cells, so that they are eventually recognized as “foreign cells” by the Immune System and eventually lead to the development of Autoimmune Diseases, can be restired in a time period of at least six months.

Symptoms of Autoimmune Disease recede from the first months of treatment. The overall health levels are improving. Gradually, patients who additionally apply the instructions given at the end of treatment, reduce any chances of relapse to a minimum.

Diplomate and Board Certified in Anti-aging, Preventive, Functional and Regenerative Medicine from A4M (American Academy in Antiaging Medicine).