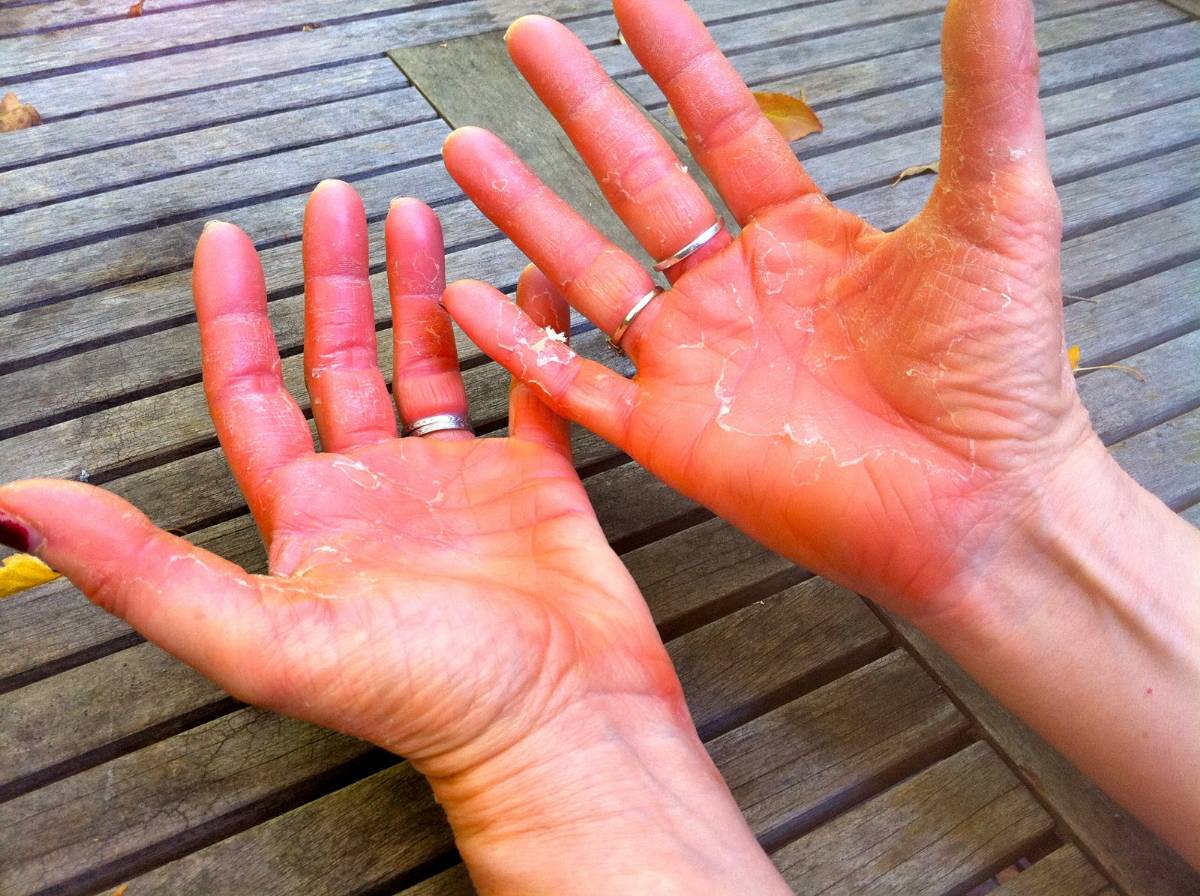 Psoriasis is a painful chronic inflammatory autoimmune disease, not transmitted, manifested as chronic dermatopathy and has a serious negative impact on the quality of life of patients.

The researcher, Dr. Usman Khalid, explains that psoriasis should be considered a systemic inflammatory disease that affects the whole organism and not just an area on the skin.

Psoriasis, whose name derives from the ancient Greek word “psoros” (scale), was known thousands of years ago. Since prehistoric times there have been reports both of Egyptian papyrians and of Greek mythology where they considered it a curse of the gods. Indicative is also the reference to the Bible (Leviticus) where people with psoriasis were considered socially marginalized and stigmatized.

Worldwide, millions of people suffer from psoriasis. It is estimated that 1.5-3% of the population suffers from some form of this disease and for Greece the patients reach 200.000. Each year approximately 60 new cases per 100,000 population occur, and are more common in the Caucasian race. It occurs with the same frequency on both leaves, and it has been observed that about one third of patients with psoriasis have a family member with psoriasis too.

The onset of the disease may occur at any age, however, it presents two age peaks, ie either the 2nd or 3rd decade of life (type I psoriasis) or the 5th decade (type II psoriasis).

Clinically, it is characterized by erythematous spots, papules and plaques, which are covered with silver scales. In particular, psoriasis lesions begin as red, erythematopoietic papules, which coexist and form round or oval plaques, clearly covered by surrounding normal skin.

The scales are silver, adhered and after their removal, stiff hemorrhagic lesions (point Auspitz) are formed. Although psoriasis can affect any part of the skin, it has a selective location on the elbows, knees, scalp, follicular fold, hand and foot pricks.

There are six, mainly, different forms of psoriasis:

In psoriasis, the cell life of the epidermis decreases dramatically and reaches from about 28 to 45 days in about 4 days, that is, cells multiply and differentiate at a much higher rate than normal.

Cells that normally circulate in the blood vessels of the dermis below the epidermis, specifically T lymphocytes, leave the vessels in the dermis and cause functional disorders in the epidermis cells causing the development of psoriasis lesions.

Substances that play a major role in those changes that lead to the appearance of psoriasis damage are interleukins 1 and 2 and tumor necrosis factor a (TNF-a).

The defense system of the body causes the cells of the epidermis to mature and multiply more quickly.

Factors contributing to the manifestation of psoriasis

From epidemiological data and observations it is believed that a predisposition to the disease is inherited. One third of patients with psoriasis have a positive family history with one or more members of their family suffering from some form of the disease.

That is, the disease is not hereditary in the sense of direct transmission from parents to children, but in the sense of increased likelihood of occurring in children when psoriasis is affected by the parents.

Thus, the probability of psoriasis occurring in the first child of a parent suffering from psoriasis is raised to 10% of 1-3% of the general population, and if both parents suffer from psoriasis, this probability accounts for about 30% of cases.

If the first child is not suffering from psoriasis, then the likelihood that the second child suffers is even greater in bSOLUTIONSes.

That is, factors that appear to contribute to the occurrence of the disease in a genetically predisposed individual

Up to now, over 20 candidate gene types and more than 1300 genes have been isolated on psoriasis. The gene region that appears to be more strongly associated with the onset of the disease is PSORS1.

This region is located at the major histocompatibility complex I of chromosome 6p21.3, which is said to encode HLA genes associated with the occurrence of autoimmunity. PSORS1 has been associated primarily with HLA-C (human leukocyte antigen-C) and in particular with HLA-Cw6.

In addition to PSORS1, other possible predispositions to psoriasis gene domains that are found outside of the MHC region have been isolated, and more specifically, PSORS2 to PSORS9 have been identified by assay analysis.

Another gene that has been associated with a psoriatic phenotype is the IL36RN gene. This gene encodes the IL-36 antagonist receptor (IL-36Ra).

Researchers at Washington University in St. Louis, USA, identified mutations in the CARD14 gene in two families with a history of the disease. The binding of the CARD14 gene to the disease indicates that the skin is the one that plays the first role in its pathogenesis, with the immune effect in the next stage.

Gene mutations increase activity of a factor (NF-kB) that promotes gene expression. As a result of the action of NF-kB, it is the production of molecules that “invite” the cells of the immune system to the skin, starting the vicious circle of inflammation that is so characteristic of psoriasis.

Psoriasis and other Diseases

The incidence of diabetes is 27% higher in people affected by psoriasis than those who do not have the condition.

Cardiovascular diseases (myocardial infarction, pulmonary embolism, stroke) are more common in psoriatic patients (Henseler, T. J. Am Acad Dermatol 1995).
Also, researchers looked at medical data from all Danish adults. They discovered that people with psoriasis are more susceptible to heart failure and the risk increases as psoriasis gets worse. (The research was presented at a conference of the European Society of Cardiology).

Chances of hypertension are 1.58 times higher in people with psoriasis due to dysregulation of the renin-angiotensin system, elevated levels of endothelin 1 in the blood, and increased oxidative stress.

Fat infiltration, congestive inflammation and focal necrosis have been observed more frequently in liver enzymes in psoriatic patients before commencing treatment with methotrexate compared to controls. Possible explanation is the increased prevalence of obesity in psoriatic patients and the association of steatohepatitis with obesity.

The treatments applied (administration of Ciclosporin, Methotrexate and Retinoids) to fight psoriasis focus primarily on reducing the symptoms of the disease while causing stressful cellular conditions manifested by a number of undesirable side effects such as nausea, hepatic enzymes increased, myelosuppression (decreased whiteness pancytopenia), dry skin and mucous membranes, hair loss, increase in serum triglycerides, kidney damage, arterial hypertension, hyperplasia one of the gums and hirsutism whereas these drugs are also known to cause teratogenicity when taken by pregnant women.

Biological agents are drugs that inhibit the function of an agent called TNF, derived from the original Tumon Necrosis Factor, ie a tumor necrosis factor, commonly a factor with strong anticancer activity.
The use of biological agents also aims at reducing the symptoms of the disease, but there are reports that have linked them to the emergence of new bacterial infections, the resurgence of chronic infections (tuberculosis, HBV infection, HVV infection), neoplastic diseases (skin cancer, lymphomas).

Patients suffering from psoriasis are forced into life, subject to multiple medications. They see their problems gradually multiplying, while reducing their quality of life.

The classic medical approach is limited to treating Autoimmune Diseases at symptom level. However, without being able to identify and handle the causes that cause the biochemical deflection and result in the expression of the disease.

The main causes of Autoimmune Disease concern the reduced production or deficiency of enzymes, hormones and other basic elements of burning the human organism.

All of these Insufficiencies, Malfunctions, bad burns lead to biochemical diversion, mechanisms and function of all human tissue and organ cells

Our cells are the smallest units of life, cell groups create the tissues and organs of our body. Their overall biochemical and hormonal balance, homeostasis, is directly related to our state of health. Body homeostasis and metabolic pathways depend on the absorption and absorption of food, as well as on toxic compounds that enter our body.

Psoriasis as an autoimmune disease can be treated, where specialized examinations are used to understand the imbalances that exist in the body and that synergistically lead to the disorganization of the immune system and ultimately to the onset of the disease.

In this way, it is possible to apply an individualized regimen without causing stressful cellular conditions, thus reaching homeostasis at cellular and hormonal level and thus controlling the disease.